National Museum of Emerging Science and Innovation in Tokyo presents the “world’s first large-scale spherical OLED” and what do you think they display on it? Right! Cool! As soon as they can do that with bendable OLED panels and thus do away with the gaps in the globe’s surface, I’m sold! On another note: While … END_OF_DOCUMENT_TOKEN_TO_BE_REPLACED 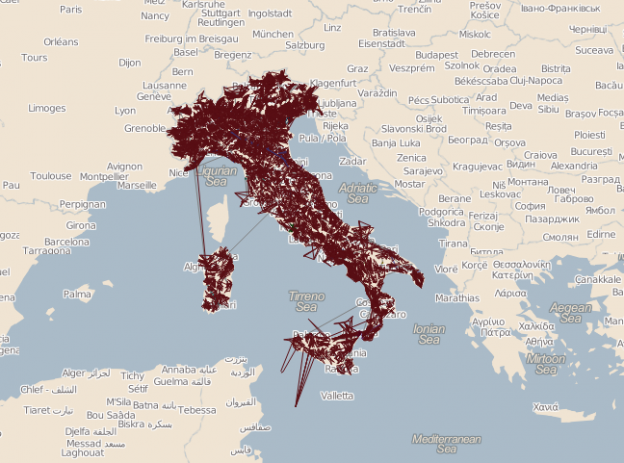 I have made various ZIPScribble Maps – Switzerland, Germany, France, Italy – as well as a two-part tutorial on how to produce them using Geonames data, TileMill basemaps and Processing as visualization environment. Those were inspired by the original ZIPScribble Maps by Robert Kosara. He’s back with an interactive version of many ZIPScribble Maps (interactive in … END_OF_DOCUMENT_TOKEN_TO_BE_REPLACED

A sweet piece of art, wonderfully executed (and using Street View) – enjoy it in full screen:   (Head over to Vimeo, if the embedded version doesn’t work for you. It often doesn’t for me.) The film was made by Tom Jenkins at The Theory film production company. (found via FlowingData) END_OF_DOCUMENT_TOKEN_TO_BE_REPLACED

The New York Times’ Abstract Sunday of this week features the World Map of Useless Stereotypes by Christoph Niemann of I LEGO N.Y. fame. Obviously, the geography has been messed with a little. And New York and its five boroughs (minus Staten Island) are prominently displayed completely out of scale with the rest of the ‘map’. … END_OF_DOCUMENT_TOKEN_TO_BE_REPLACED